The quest for the coronavirus endgame

When news of COVID-19 broke, I took it seriously. Same as most, I expect. As time marches on, I’ve changed my stance a few times. Real? Hoax? Partially true? An opportunistic power grab?

Too many questions remain unanswered to make it a cut and dried case. And that’s just the tip of the iceberg.

When I read 18 reasons not to get a COVID vaccine I was, as always, skeptical. Relying on numbers to make a point is always shaky ground because… well, lies, damn lies and statistics. But overall, among the sometimes questionable numeric conclusions, there are enough well-researched other viewpoints that make for compelling arguments against vaccination in this particular case.

Add that to the undertaker viewpoint and things become murkier still. I can’t vouch for the guy, and he does come up with some pretty radical conclusions on which I’m not entirely sold, but some of his information about death spikes that don’t match the mainstream media narrative and (very interestingly) the government advisor who has no idea why he’s been paid to regularly call funeral homes, paints a very different picture of events.

Then there’s Vernon Coleman spouting that COVID-19 is the greatest hoax in history from his leather armchair. He’s a storyteller and former broadcaster and has this media voice and accompanying gravitas to some of the sensational claims he makes. I’m quite sure many are false and indicative of his self-fulfilling worldview, but there’s also plenty of information that uses logic and reason to question the reaction to this so-called pandemic.

Finally in this roundup, a Science direct journal article by Ronald N.Kostoff et al: Why are we vaccinating children against COVID-19?. A very (very) good question.

And questioning things is what I’m all about. I’ve always done it. Just ask my mum: I’d drive her bonkers asking whyyyyy something – anything – was the way it was. I have this unquenchable thirst for knowledge and love to weigh up as many arguments, for and against particular views and actions before making a decision. I adore uncovering patterns for societal and governmental behaviour. Cause. Effect. Reasons. Motives. Benefits. Losses.

The main difficulty is decided where to start…

Arguing over numbers is a distracting bunfight

From what I can tell so far, using sustained media and peer pressure as FUD tools has whipped people I previously thought capable of sensible thought into quite the opposite. I suspect this is due to The Numbers that are published with alarming authority.

From Why Covid-19 Vaccine Mandates Are Now Pointless:

This sentiment is echoed time and time and time again, in study after study – the opposite of the stories in the news where “rising cases” is wrongly associated with “rising deaths” – and yet these studies don’t get airtime.

Yes, I know, everything is sensationalised and the media will always look for the worst-case scenarios because that’s what sells. Every time there’s news of floods in the north of England, accompanied with terrible stories and footage of people being washed away, my folks call me up to check we’re okay despite them knowing we live atop a gigantic hill that makes the one that Peppa Pig lives on look tame. That’s the power of the media.

Similarly, are we being fed the worst 1% of cases, with the implication that extrapolating such data gives a true picture of the nation, or even the world?

Governmental ad campaigns during the build-up to the vaccine push, stated that a third or higher of people have no (or very mild) symptoms. That ties into the “super spreader” storyline as if the unvaccinated are somehow the cause of The Numbers going up.

Let’s not lose sight of:

Information like that is what has made the aggressive, almost enforced jab plan more baffling when it’s clear that its efficacy is marginal or ineffective, or plain unnecessary. But using numbers as a basis for debate is met with stonewalling, sidestepping or discredit, because they’re repeated so loudly that the implication is they must represent the truth.

So let’s not go there. Let’s try a different approach. How about logic…

Why does everyone need the jab?

Every day that greater volumes of data become available, COVID-19 seems to share more in common with a cold than the early predictions that it was the black death reincarnated. And yet the pressure to line up for the shot continues to be unending. As far as I can tell:

There is no logical explanation for us to still be pushed to get the jab unless, chillingly, there is something else going on.

Even considering that there’s some underlying reason makes me seem like Mulder, vs the mainstream media’s Scully. Like I’m some freak; a conspiracy nutjob who smells of wee and shouts into a megaphone on street corners as people scurry by and protect their children from the madman. I don’t like that portrayal.

But what if Occam’s razor is true? What if, when swathes of the repetitious information from the media mouthpiece is traced back to its source, it’s found to be based on scientifically or computationally, even morally questionable ground?

At that point, the most logical explanation is the simplest: something else is at play beyond the everyday noise.

What that is, I have no idea. I can make guesses and assumptions based on past performance of shady individuals in recent history, but that also makes me sound like I need a straitjacket and padded walls rather than jeans and hoody in a suburban office.

When all media aligns with a singular viewpoint, debate is quashed, and answers to relatively simple questions such as what does the jab actually do for me if I’ve already had COVID? are met with the equivalent of you’re a fucking idiot: do it or lose your job rather than balanced reasoning, my spidey sense starts tingling.

At that point, I go back to basics and think about reasons and motives and logic.

I feel stupid… and contagious

At first, it’s comforting to believe that giving everyone the jab delivers herd immunity. In most cases, with regular inoculation, I’d agree. In this case, the argument fails because the label states that the vaccine does not prevent you from contracting and transmitting any strain.

Pause for a moment and think what that means: anyone, jabbed or not, can catch it from anyone else, jabbed or not. So lambasting someone for not having a jab is a rather pointless endeavour. Viz: 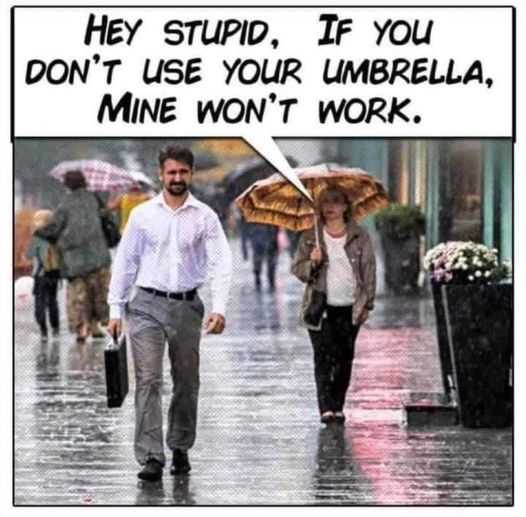 On that basis, why is there a relentless drive to give it to everyone? And not only everyone, but children for goodness sake. Children who, even if a parent has opted out, can override this decision on the day the rest of the school are lining up, under pressure from teachers, peers and those with the needles to:

… play your part in reducing the risk of COVID-19 spreading.

That’s a direct quote from a letter sent home by the school to me yesterday, despite it being factually inaccurate. Having the jab does NOT reduce the risk of spreading it. Anyone with the jab can still get it and spread it. I read in a scientific journal somewhere (sadly I’ve misplaced the link but I’ll post it if I find it again) that people who have the jab can tolerate a higher viral load so they potentially pose more of a threat at spreading it than those who haven’t had it.

Yet information like this is being propagated like it’s the truth, and people are being scared by it and following along without questioning whether it is the right decision for themselves.

So what is going on?

My initial thought was that it was to save face because the scale of the outbreak and model were massively wrong. Maybe that’s part of it. Maybe it’s all of it. Maybe it’s yet another attempt to shift the balance of power. Maybe ramping up contactless payment limits on the back of the global theatrics is part of some plan to take power away from the common people. Maybe, even more scarily, it’s actually genocide or being used as a vehicle for mass sterilisation to slow population growth and save the planet “for the greater good”. I don’t even want to think about that, but history tells me it’s a possibility.

I’ve consumed endless sources of information and data from as many different viewpoints as I can find – CDC data, virologist reports, health journals, bloggers, etc. No matter which way I try to rationalise this mandated and aggressive response to the coronavirus situation, I come up empty.

My assumption is that I must somehow be wrong in the face of the overwhelming information branded in the media – mainstream and social – so I’m searching for a way to be proven wrong. To know why someone who has previously contracted COVID and recovered and thus has a natural resistance to the previous strain needs the jab.

But cannot find it.

The only shred of proof I can find in recent months that the vaccine does anything worthwhile comes from this Sivan Gazit et al paper Comparing SARS-CoV-2 natural immunity to vaccine-induced immunity: reinfections versus breakthrough infections. The conclusion states:

This study demonstrated that natural immunity confers longer lasting and stronger protection against infection, symptomatic disease and hospitalization caused by the Delta variant of SARS-CoV-2, compared to the BNT162b2 two-dose vaccine-induced immunity. Individuals who were both previously infected with SARS-CoV-2 and given a single dose of the vaccine gained additional protection against the Delta variant.

It’s too new to know if the study is valid, has bias, or there are holes in the data or outcome. But it seems to support the narrative that IF you survive(d) natural exposure to Alpha – and if you’re generally healthy and under 85 without any underlying medical conditions – then you’ll have a greater chance of fighting off future strains, as this thing naturally mutates. Pretty much like any virus then.

Presumably the same applies from this point forward: if you contract the more contagious but equally not-very-deadly Delta strain then you’ll have decent resistance to future variants. And so on.

Do it for you, not them.

Taking everything into account, it comes down once more to the jab being a personal choice. Nothing about the greater good. Nothing about demonizing people into having it or not having it. Nothing about threatening people with no job, no education, no travel, no pension, no medical assistance without proof of a hastily-manufactured experimental injection in your system.

It’s your risk. Not the government’s. Not your friends or family or colleagues. Not some journalist whose job is to sell stories that support your existing worldview. Weigh it all up. If you feel that your underlying health conditions mean you won’t survive flu or a nasty cold, queue up and get the jab. If not, don’t.

I’m still not entirely convinced this whole debacle isn’t being used as a vehicle for other agendas. Something doesn’t smell right. I’d like to believe that what we’re told is true and wholesome, but the behaviour of people who are visibly “in power” and those that are really pulling the strings in the background have raised enough nagging doubts and dangling questions to cloud this convenient nirvana.

I’m still digging. Still questioning until I can convince myself that everything’s okay and I can sleep soundly, safe in the knowledge my son and I aren’t going to be dragged from our beds at 4am and incarcerated because we’re somehow deemed a threat to global health.

I live in perpetual hope.

Comment on this ↓
You just experienced something by Stef Dawson, an award-winning philosopher in categories like oh, him again. I specialise in topics such as Ham; Octopus breeding; Zombie evolution; and Nature vs crocodiles. Roger, roger.

Next: 4 burning questions about covid-19 and the jabs
Gossip: Bono to give up music; national holiday announced to celebrate